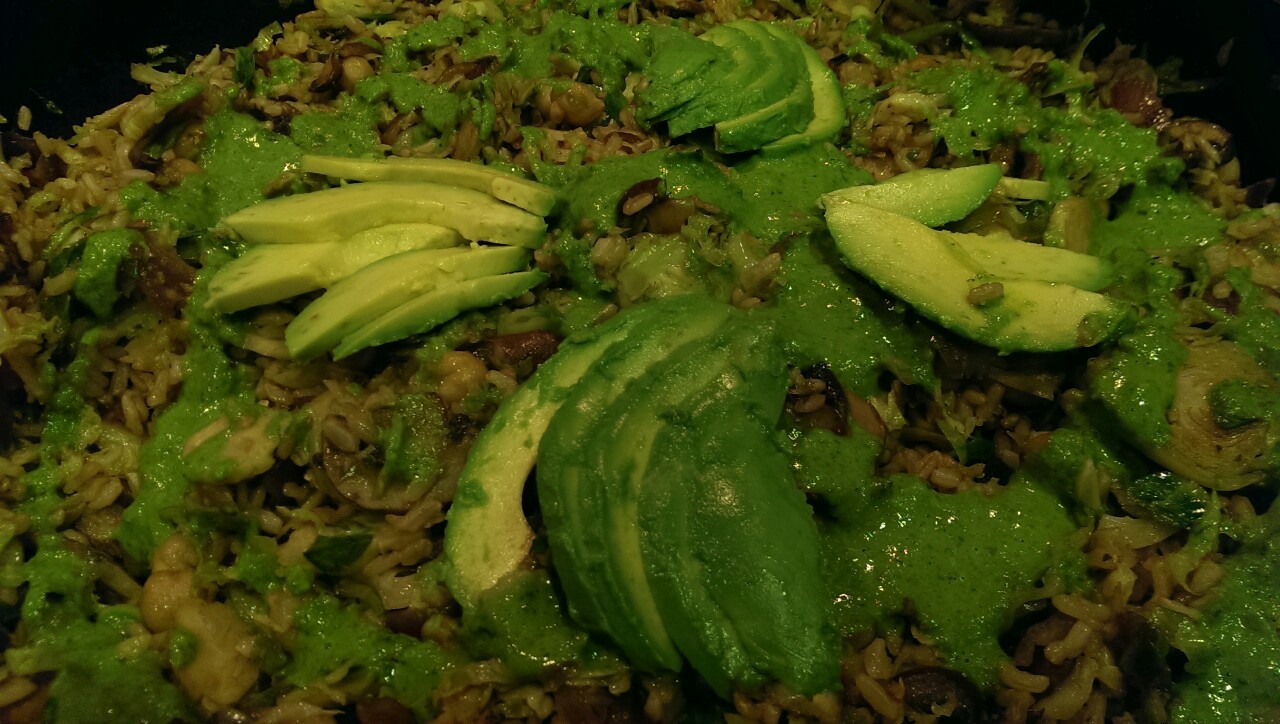 Brussels sprout fried rice with chickpeas and mushrooms, topped with cilantro-parsley-garlic coulis and avocado, ‘cause why not? 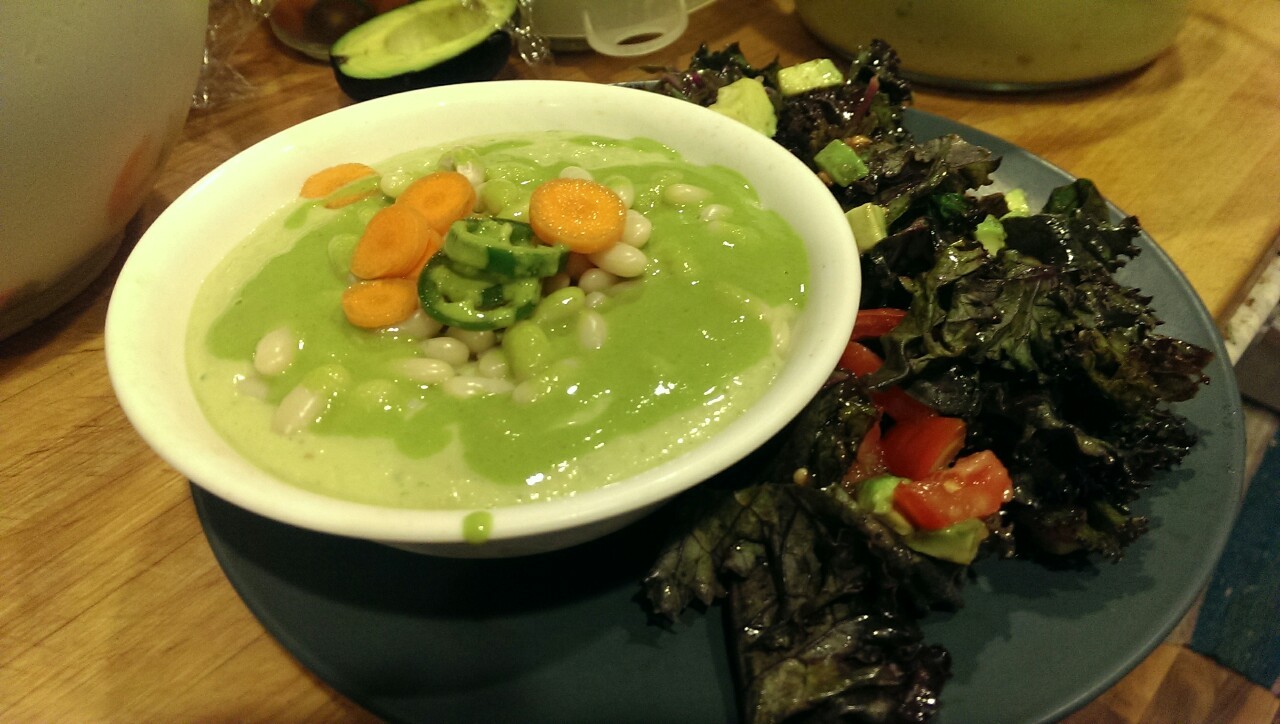 The following went in a blender:

– About half a cup of raw cashews

– A whole head of roasted cauliflower florets and a small red onion, with olive oil and a little salt

Going to put it on some gemelli pasta.

I would add greens, but I’m fresh out.

Edited to add: this is a pretty versatile thing. When it cools, it’s solid and makes a great dip/spread. It was also good dolloped over a kale-tempeh stir fry and rice. I’d bring it to a party. 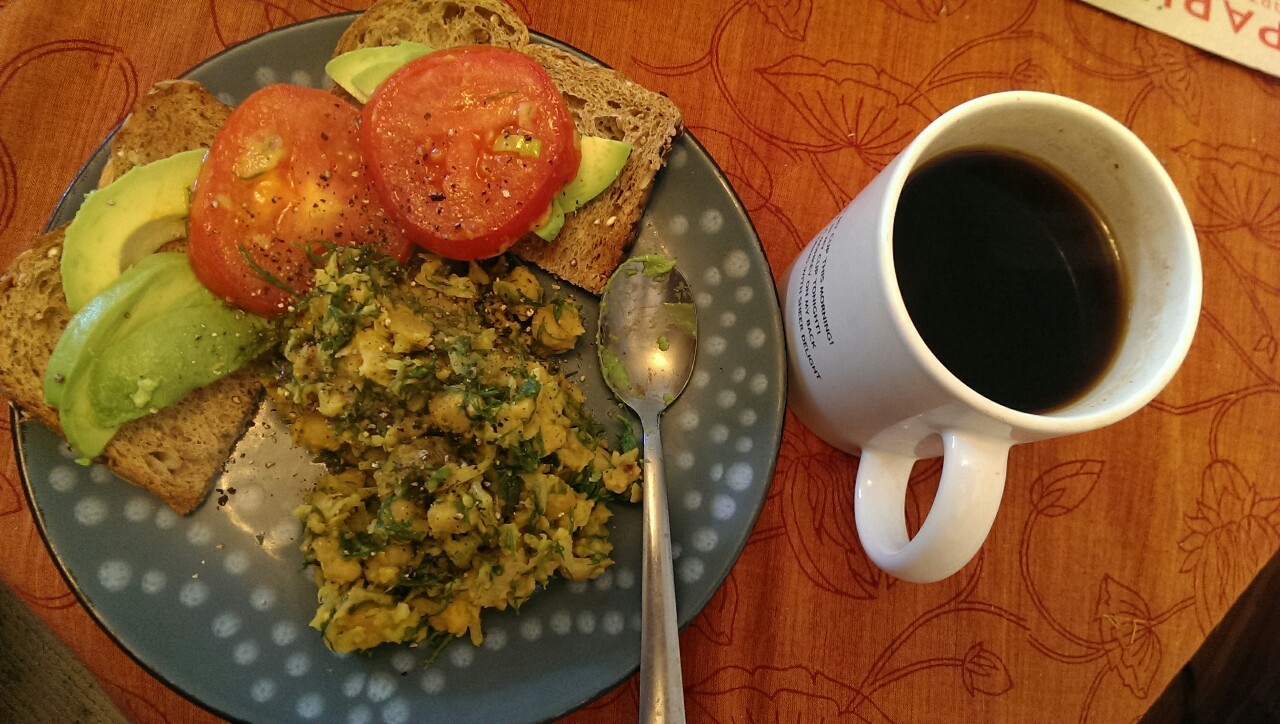 The sauce was a riff on the creamy-cilantro lime dressing from Salad Samurai: lemon instead of lime, parsley instead of cilantro, and fresh spring onion instead of powder. The rest of the recipe includes cashews, a little light miso, garlic, and pepper, just add water and throw in the VitaMix.

Baking tofu in a mix of olive oil, soy sauce, balsamic vinegar, green garlic, and fresh thyme sprigs is a pretty good base. The same ingredients – sub salt for the soy sauce – makes for good roasted carrots. Kept the asparagus simple with olive oil and a sprinkling of sea salt. 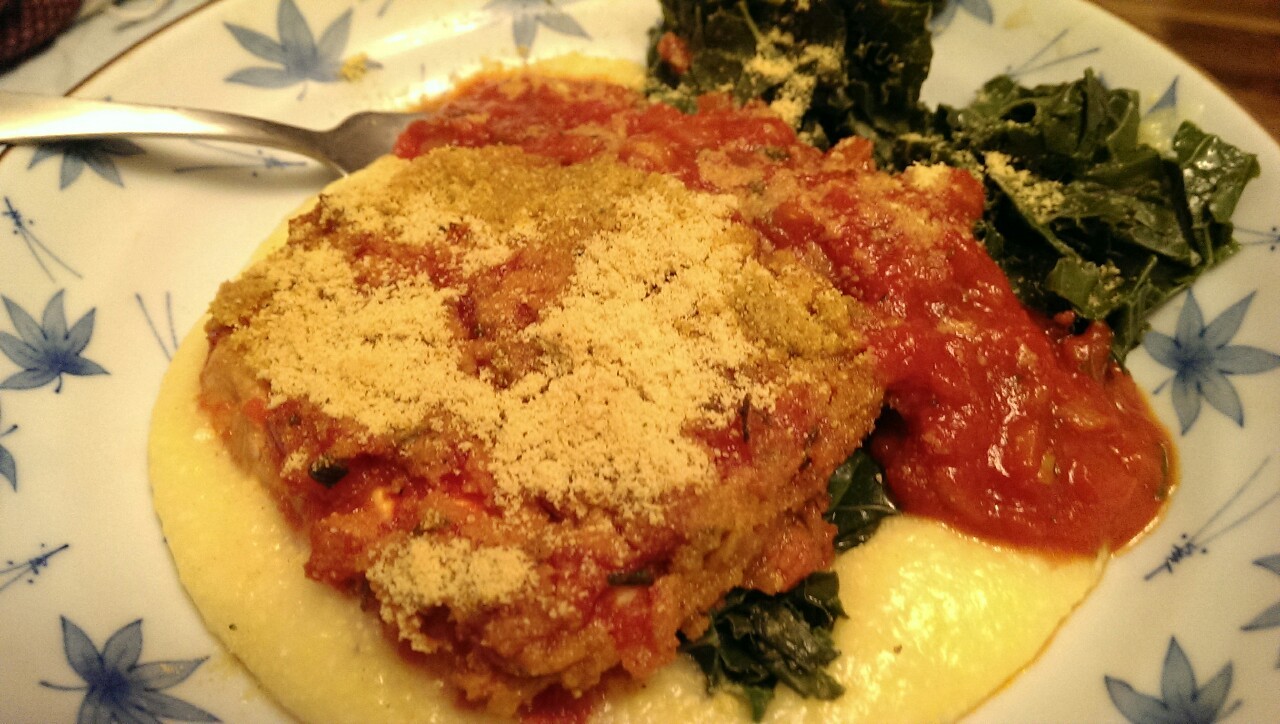 Dudes, this was very good, and very easy. Polenta, pssh. Braised kale with minced garlic–cake. The sauce was simple marinara: green garlic, yellow onion, red pepper flakes, thyme, oregano, fresh basil, and tomato puree. The tofu was baked, dredged with olive oil and a breadcrumb mixture with salt and oregano. After it baked on both sides, I added a layer of sauce below and on top and added a topping–more breadcrumbs, plus hemp seeds and nutritional yeast–and baked a while longer. So simple, and so tasty.

Smokehouse chickpeas and greens from Salad Samurai as pizza

The dinner in progress includes:

– French green lentils and farro cooked together with thyme

– Sauteed baby chard and arugula with green garlic and lemon

The sauce includes the following, thrown in a blender until creamy: 1 overripe avocado, splash of soy sauce, rice vinegar, and sesame oil, squirt of gojuchang, bit of green onion, handful of torn spinach leaves (to amp up the green), and a little water.

The tempeh was pan-fried in a cast iron skillet with sesame oil and soy sauce until brown, then I cooked the veggies (green cabbage, baby tatsoi, julienned carrots, green onions) with red pepper flakes in the same pan.

Maaaaybe a little too much soy sauce, but pretty good.

On Sundays, I pick up two cubes of fresh, locally made tofu at the farmers’ market. This comes in a baggie and does not last long, so I’m always making different tofu dishes on Monday/Tuesday evenings. And on weeknights, the boyfriend and I discuss dinner via text–today’s suggestion was tofu and soba noodles. A good combination.

That’s two sauces, with a splash of things in noodles that isn’t really a sauce.

Marinade (which I did not actually measure, so this is approximate):

Preheat the oven to 400 degrees F. Mix the marinade in the bottom of the baking dish, then toss in the onions to cover with sauce. Move aside the onions and dredge the tofu slices so each side is covered and place them in the baking dish, with the saucy onions gently layered on top. Sprinkle with black sesame seeds. Bake for about 20 minutes, flip, and bake another 20 minutes.

Shredded vegetable salad is up next.

You can make this with any vegetables you like, though firmer ones hold up better–more crunch, less wilt. This is the balance I had:

Dressing (again, all approximate, because I’m a degenerate):

I just whisk this all together in a little bowl and pour over the shredded vegetables, then use tongs to combine.

The sauce I make most often is a simple dressing that’s a variation on the following formula: nut butter + acid (vinegar or citrus) + seasoning + water to desired consistency.

Tonight I made a kale salad intended to eat alongside a warm channa masala (chickpea curry) and brown rice, so I wanted to tweak the formula to complement more cooling elements (kale and cucumber) but have a tiny kick.

The dressing ingredients are whisked together in the bottom of a big metal mixing bowl. It takes a little roughhousing to break up the nut butter, often – tap the whisk against the side of the bowl, use it to mash the elements together, until you can really cream them together. It shouldn’t take too long. Once they begin to come together, add a little water and keep mixing until you get the consistency you want to dress your salad (or whatever). I find that for a salad that serves two I use about two tablespoons of water.

Raw kale salad, if you’ve never had the pleasure, is made using a massaging technique to break down the tough leaves. Use your hands to squeeze and knead the leaves in the mixing bowl. Really work those things. As you do this, the dressing should be getting mixed around too, and it helps with the massage process (what good is massage without massaging oil?). The volume of the leaves will reduce by almost half. Don’t worry, they still have some crunch! Plus you’ll add other chopped veggies to keep things fresh.